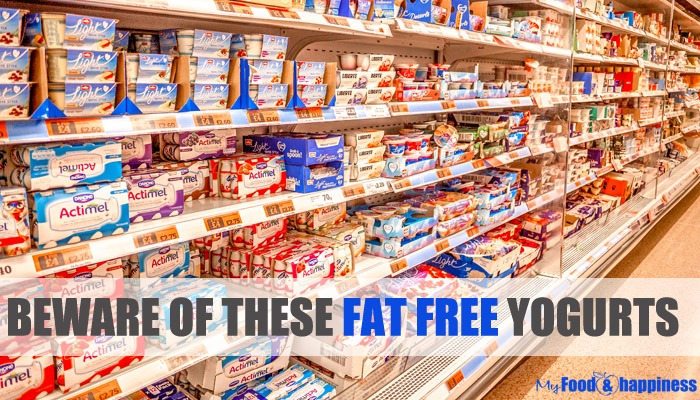 We love yogurt and kids love it as well, especially when it’s pink and it ‘s supposed to contain strawberries or other fruits in it. Because we love it so much, yogurt is part of most people’s shopping basket on a daily basis. Unfortunately often we don’t realise that these products could hardly be classified as yogurt, the more appropriate definition is sweetened and coloured yogurt-like desserts.

Most of the flavoured “healthy” fat-free products are full of added sugar, artificial sweeteners, colour and other ingredients that shouldn’t be consumed on a daily basis. The more concerning problem is that children are heavy consumers of the Kids yogurts which in some cases are even worse. It’s difficult for your kid not to want them since they have been designed to attract kids with their numerous TV adverts and fun colourful packaging but remember that at the end of the day you are still the one in charge of your kids’ food.

So let’s have a look at some of the most popular fat-free yogurts that we watch all day on TV. Are they really going to help us maintain a slim figure and how are they creamy when they don’t have any fat? 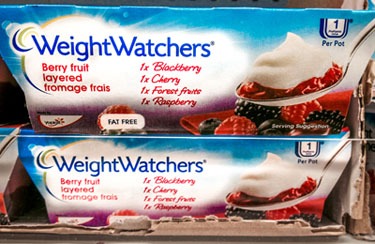 Let’s start with my “favourite” brand – Weight Watchers. One of the first things you see on the package is the “FAT FREE” sign below the reassuring “Weight Watchers” logo. It doesn’t say “yogurt” anywhere on the packaging as it isn’t but it’s in the yogurts section of the store and most people probably wouldn’t even notice the difference.

Here are all of the ingredients of the blackberry flavour:

I think it’s fair to say that this is a very long list. Quite a lot of them are artificial and even though there are some additives that are safe in small quantities, we see some very alarming sweeteners that should not be consumed on a daily basis.

The “Fat free” label is considered by many people an indication that the product is healthier than others and will not promote weight gain. This is a marketing strategy which deceives consumers, in most cases the products are free from fat but full of different types of sugars that affect our weight and health much more seriously. “Low in calories” is another catch phrase that is a misleading mainstream belief about healthy food, more about this in why you need to stop counting calories. 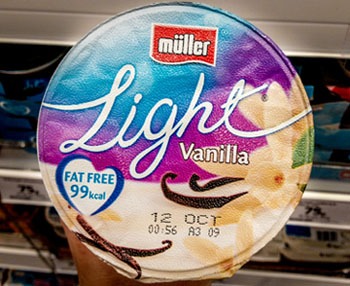 These are all of the ingredients of the Banana & Custard flavour:

There are several concerns about this yogurt. First it contains animal by-product which is not nice and many vegetarians might not realise it. It also contains colours, flavourings, carcinogenic sweeteners and an additional third sweetener “Syrup” which doesn’t give much information about what kind of syrup it actually is.

One fascinating fact about the Vanilla flavour is that it doesn’t contain any actual real vanilla, just artificial flavourings and sweeteners to make it taste like vanilla. 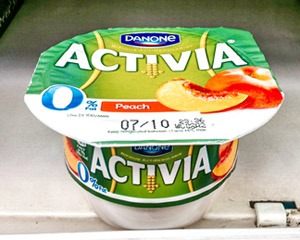 These are the ingredients of the Strawberry flavour:

The Activia yogurt has the same bad ingredients but it is also extremely high in sugar compared to the others. This pot of light 0 % fat yogurt contains 14.5 g of sugar, which is equal to one whole table spoon of sugar. So while you are avoiding the fat, you are actually consuming a huge amount of sugar which is definitely not going to help you stay slim.

These are all of the ingredients of the Mango & Peach flavour:

Reading the ingredients of all of them you can actually see pretty much the same list on each one which means there isn’t really much difference from one yogurt to another, same processed product just different brand and packaging.

This article from Fit day explains in more detail why each of the most popular 4 sweeteners found in the above yogurts are not a safe additive to our food and are actually quite dangerous.

The list doesn’t end here unfortunately, pretty much any flavoured yogurt has similar ingredients. The problem with the fat free ones is that they deceive the consumers, making them think they are buying innocent food – a yogurt with fruits and no fat, right? It should be as simple as that but unfortunately we can’t find that simplicity in processed food. Real yogurt contains live cultures and no added ingredients or fat removed. The skimming process of the milk is not a natural process as well, it removes some vital vitamins and results in a more processed product. Fat in yogurt is what makes it creamy so in reality fat free yogurt can’t be that thick and creamy without the help of artificial additives to keep it thick. Read more about the benefits of real full fat yogurt in the Dairy & Eggs Guide.

There is always an alternative

Is it really worth risking your health by consuming the above carcinogenic yogurts? The occasional processed sweetened yogurt will probably be harmless but regular consumption of such products can really help you put on undesired weight and challenge your body with unnecessary additives. How about next time you buy the simple natural full fat yogurt and add fresh fruits yourself? Even if you are at work you can still do that, natural organic yogurt is sold in small pots as well and there are always many fruits available in the supermarket that are washed, packed and ready to be eaten.

How much will the alternative cost? For example Sainsbury’s sell a small pot of organic yogurt, which is 150 g (bigger than the regular flavoured pots which are about 120 g) for 0.50 p. You can also find in Tesco and other supermarkets small pots of Yeo organic natural yogurt which is also 0.50 p and 150 g. A small banana costs about 0.11 p. The total cost of our natural banana yogurt is 0.61 p. This is slightly more expensive than the yogurts above but that’s because they are sold in a multi packs which reduces their cost. The price of your home made fruit yogurt would go down to about 0.35 p per 100 g if you buy fruits in larger quantities and the natural yogurt in the large regular 500 g pots. That’s cheaper than most yogurts.

This means you can actually buy more for less and still be healthier. It doesn’t have to be fat free if you are on a real food diet and you get the right nutrition. There is 4 g of fat in a 150 g pot of natural yogurt, do you really think it’s going to affect your weight that much? You should be more worried about how the added sugar and sweeteners are going to affect your weight and health. This article is related to this topic – why processed food is the main cause of obesity.

Bottom line, be a smart consumer  and love the natural probiotic yogurt, not the colourful, deceiving yogurt-like desserts the food industry is selling you.