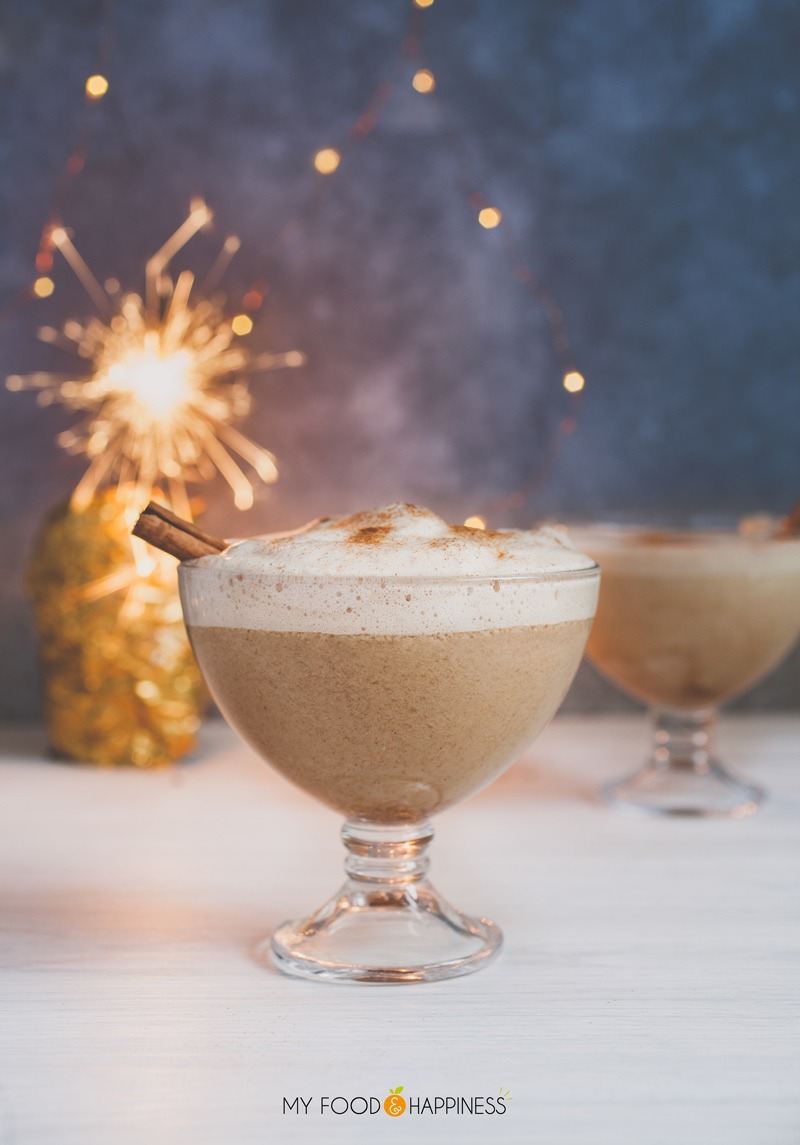 Are you missing out on Christmas eggnog as a vegan? Well you don’t have to. This year try to prepare this fluffy vegan eggnog recipe, without any eggs or dairy and enjoy the flavours of the traditional Christmas drink!  Ho-ho-ho!

This vegan eggnog is creamy and fluffy, without any beaten egg whites. How? Well this is achieved with one of the latest discoveries in the vegan food world – Aquafaba. Sounds like something fancy and special, but it’s a really simple common ingredient.

Aquafaba has actually been around for about 2 years. If you haven’t heard of it yet, it’s basically chickpea or bean water, whisked with a hand mixer, which then turns into a white fluffy mixture, resembling beaten egg whites. It serves as an egg replacement and it can be used in many recipes like meringues and this vegan eggnog. It’s a weird magic trick and the guys that discovered this are absolute geniuses.

In search of the perfect Aquafaba source

Yellow water turns it to white fluffy cloud. This is achieved simply by draining the water out of a chickpea can or some type of beans can and then whisking it for 10 minutes. You do have to experiment though as not all cans will give you the same results. You definitely want to look for canned chickpeas or beans without any added salt or stabilisers. Chickpeas seem to be the best according to the online world and you can either make the water yourself by soaking and cooking dry chickpeas or opting for canned ones.

I went to my supermarket and bought several types of canned chickpeas and beans as I was just curious to experiment, but you don’t need to go through all that trouble. There was one can of chickpeas with added salt and some sort of firming agent and it didn’t work well. Not to mention that you don’t want salt in your eggnog. The water that gave the best results was the only can (broad beans) that had water and beans on the ingredients list an nothing else. So I think as long as you look for something that contains water only and nothing else it should be fine.

Another point to consider when choosing your aquafaba source is the taste. Aquafaba is almost tasteless when it reaches the consistency of a beaten egg white. However, there are some canned chickpeas/beans that will have a stronger smell than others. It’s better if you find one that doesn’t have such a strong odour, but even if it does, don’t worry about it as we have lots of other flavourful and delicious ingredients in this recipe that will get rid of the smell. 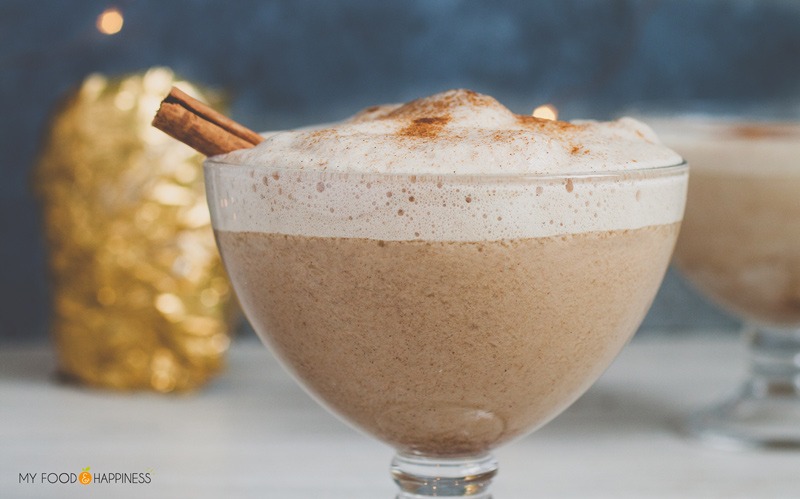 Other ingredients for your vegan eggnog

You might notice that the colour of this eggnog is slightly darker than your normal white eggnog. This is due to the soaked dried fruits which are blended with the mixture. They add an amazing sweet flavour. This alters the colour slightly but improves the taste greatly. I also recommend using a real vanilla pod rather than an extract, the aroma of real vanilla will give your vegan eggnog a divine taste.

In terms of the alcohol used in this recipe, you have several options. Normally eggnog is made with either bourbon, brandy or dark rum. I had some rum at home so that’s what I used. Soak the dried fruits in the alcohol you are using in advance to allow them to soften.

Here is the full recipe. I hope you enjoy this creamy vegan eggnog! Merry Vegan Christmas! :)