Amsterdam is the perfect city for cycling, long walks and getting lost around the canals. I was very lucky to see Amsterdam covered in snow. Snow adds a completely different look to any city, but there is one thing that it can’t hide – the beautifully skewed houses. Amsterdam’s houses don’t appear to follow any of the basic rules of architecture and this is what makes them fascinating.

One of the first things you will notice in Amsterdam is the unique and rather amazing architecture. Amazing, because when you are looking at some of the buildings, you are wondering “How are they still standing?”. Amsterdam has some of the most skewed houses I have ever seen, they are leaning in all sorts of directions, but it doesn’t appear to stop people from living there.

So why are Amsterdam’s houses so skewed?

Most of the buildings are very narrow and tall, with lots of large, beautiful windows. The buildings haven’t been designed this way just because it looks pretty, but also because of several important factors that have shaped Amsterdam’s architecture.

More windows, rather than walls, make a building lighter. They need to be as light as possible, because Amsterdam has major foundation problems. Most of the older buildings have been built on wooden poles, which over time have become less sturdy. Combined with the wet conditions of the soil, the houses are simply sinking over time. Most of the houses are attached to each other, so it looks like they sort of lean on each other and keep their balance together. However if there is a house built with no support from other buildings on one side, the leaning is even more noticeable. 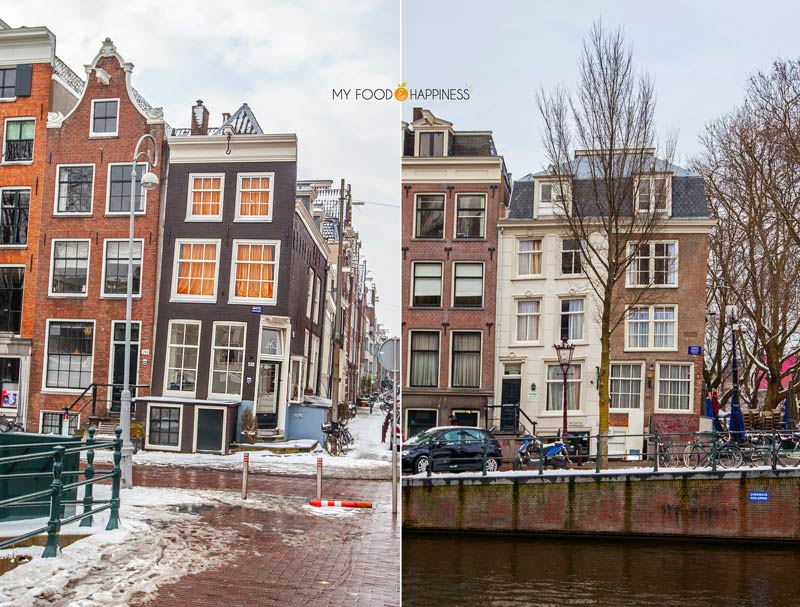 Why are they so narrow? 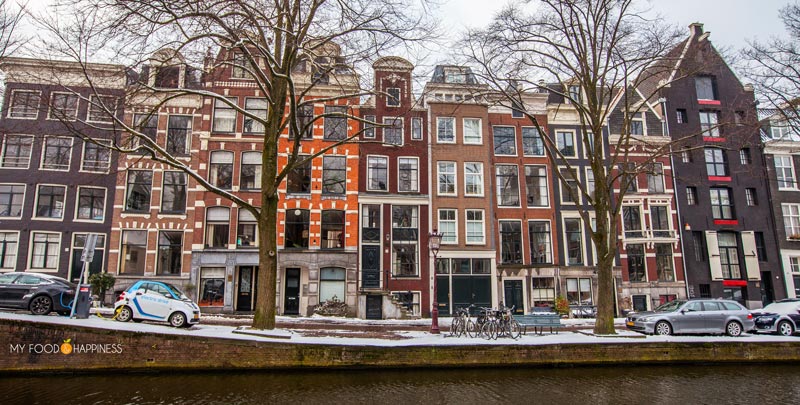 The other distinct feature of Amsterdam’s houses is that they are very narrow. One of the reasons the houses are so narrow is because back in the days taxes were charged based on the size of the building’s facade. So the wider facade, the more tax you pay. Despite that the houses are actually rather deep.

Tall and narrow houses with problematic structures are what make the city’s architecture so unique. As a result the city is now full of these weirdly pretty, unique skewed houses. The group of houses on the first picture above is particularly famous and it’s called The Dancing Houses. You can see why.

Why are some houses leaning forward? 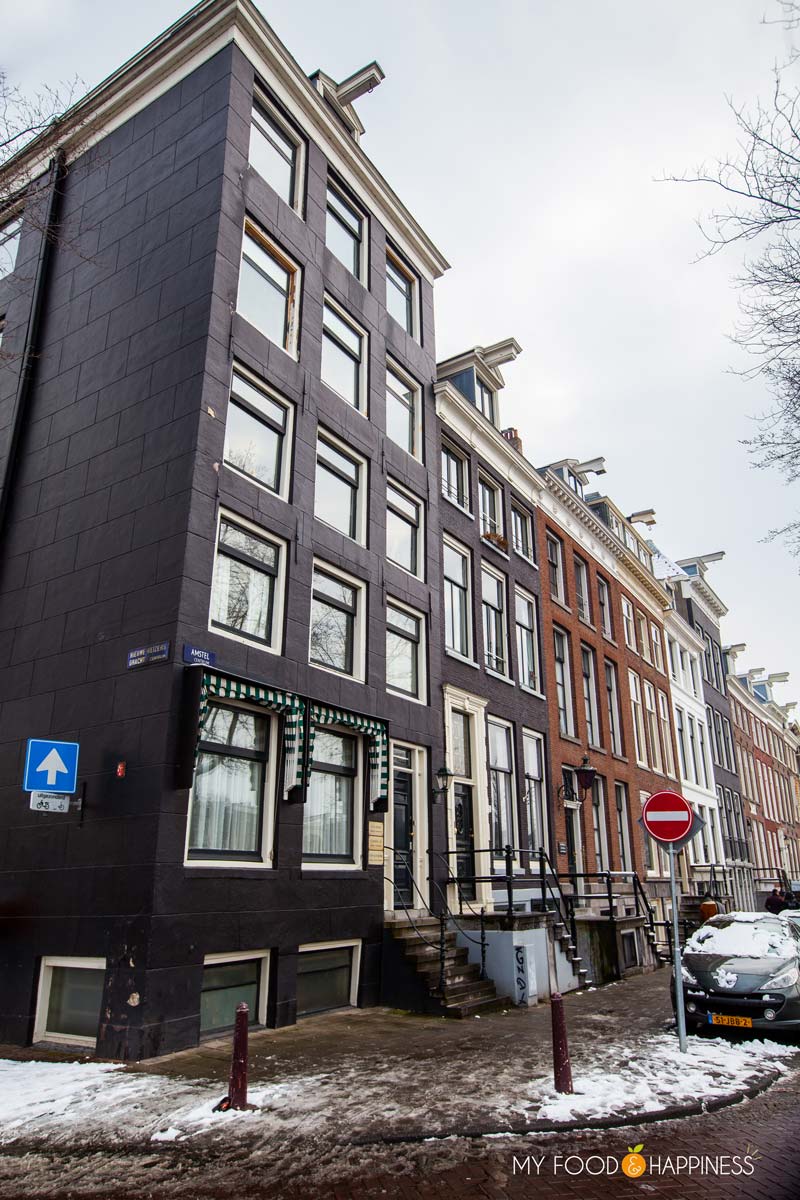 Believe it or not, this is actually a design decision. Some houses are leaning to one side, because of the foundation problems that I mentioned, but some are very obviously also leaning forward.

This is explained with the fact that Amsterdam’s houses have another very unique feature – a hook sticking out from the top floors of the buildings as you can see on the picture above. The houses were used by merchants back in the days to store goods, which would then be transported via the canals. The narrow staircases of the buildings did not allow goods to be moved easily from one floor to another. Goods and any other valuable possessions had to be stored on the highest floor in case of flooding. So the hook on the beam was used to winch goods quickly to the top floor. It’s actually used to this day by some people.

So how does this relate to the fact that there are some that are leaning forward? Well this is done to avoid any damages to the facade, when large items are being lifted up the building. There is a risk that the goods could get caught up in the facade.

I hope you get to see Amsterdam’s houses if you haven’t, get planning and go visit Amsterdam! 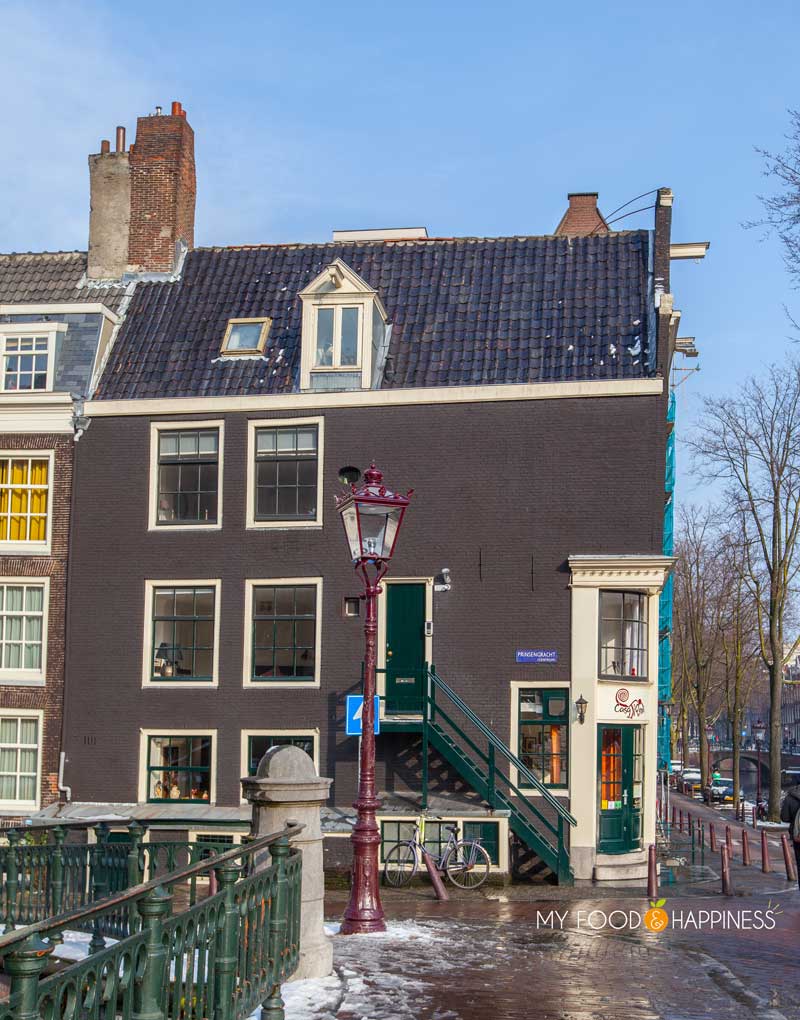